skip to main | skip to sidebar

He Do The Police in Different Voices-T.S. Eliot

Twice today, I have encountered references to T.S. Eliot’s “The Waste Land,” which is arguably one of the greatest poems in the English Language. As someone who maintains a duality of being both a visual artist and a poet, I often find myself transferring the philosophies of each practice to the other. T.S. Eliot produced a fairly small volume of poetry in his lifetime compared to someone like Ezra Pound who was much more prolific. The work Eliot produced surely earned him a place in the Poetry Canon.

Recently I sat in on a discussion with high school-aged members of a Youth Advisory Board at 826CHI, about what merits a work being part of the literary canon. It was suggested that typically, writing that becomes part of the Literary Canon must feature most of the following qualities:

-significant as documentation of the time

-ground-breaking at the time when written/ innovative

-inspires change a change in the direction of literature.

While Eliot produced a limited amount of poetry, he created it with the intent of making great poetry. He had no desire to create mediocre poetry. Should the same idea be applied to art? Should the artist’s intention always be to create a masterpiece? Eliot’s poems were meticulously crafted. “The Waste Land”, originally titled “He Do the Police in Different Voices”, was radically altered by the editorial influences by Ezra Pound. First published in 1922, it has demonstrated staying power. Had the poem been left in its original state, it likely would not have held the same importance. Good ideas are worth revision, time and careful attention to craft. While today’s concept driven art is existing in the present, it’s long term effect can only be enhanced when concept is matched with attention to quality. 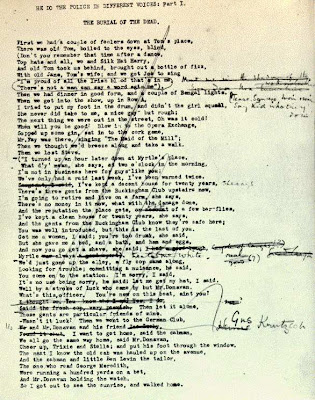 Anna Gorman
I'm a Junior at SAIC and I'm kinda, sorta focusing on illustration. Puppetry, theater, comics and any other form of narrative or storytelling art are all in my realm of interest. I'm also really keen on hand-drawn text and graphic design. I'll be bringing attention to ways art plays a positive role in our world, and why it's so important for artists to be active in our communities.
Jeni Crone
In my time at SAIC I have explored all-kinds-of-things including panting, fibers and comics and poetry, always looking for ways to link the mediums. In the spring of 2010 I will graduate with a BFA with an Emphasis in Writing. I'll be writing about the duality of being a writer and an artist and the ideas I transfer between both practices.

I am a junior at SAIC and an experimentaholic. I would like to say that I focus in photography, but also dabble in sculpture and free writing. I'm interested in the combative world of conceptual/fine art and craft/ adornment; this includes artist’s value, audience or consumer value ,which takes into account intellectual vs. functional value .